October 31, 2019 // Caleb Hailey Sensu, Inc. It's hard to believe it's almost been a whole year since the Sensu Go GA release! Here's a look at how the product has matured and details on an important upcoming change to how we distribute Sensu. Community

We’re making Sensu Go completely free for your first 100 nodes – including all commercial features, like SSO. It’s a more scalable, integrated, and secure Sensu for all!

It’s hard to believe it’s almost been a whole year since the Sensu Go general availability release on December 5, 2018. As we look forward to celebrating this important milestone, we are also reflecting on how the product has matured over the past year, and sharing some exciting changes that are just on the horizon (for a look at the upcoming roadmap, check out this post by Sensu Creator, Co-founder, and CTO, Sean Porter). But first, I want to address an important upcoming change to how we distribute Sensu.

If you’ve been following Sensu since its origin as a humble OSS project through the formation of Sensu, Inc., to the launch of Sensu Go, you’ve probably observed a gradual transition toward building a sustainable business around our beloved Sensu OSS project and community. The most visible improvements are in the product itself – Sensu Go represents a huge leap forward from the original Sensu project to become an industry-leading monitoring solution – but there have been some equally important improvements in how Sensu is distributed that don’t get as much attention.

Sensu distribution over the years

When the original Sensu project was announced, it was only available to install as a Ruby gem (it was written in Ruby, so gem install sensu was a reasonable solution at the time). Within the first year, Linux and Windows installers became available, and another year later YUM/APT repositories were published. When Sensu Enterprise launched in 2015, it was distributed via separate and private YUM and APT repositories, so upgrades from Sensu Core to Sensu Enterprise required a separate installation process.

One of our goals with Sensu Go was not only to simplify the initial installation process (now as easy as 1-2-3), but also to remove friction in the upgrade process. So in addition to launching the first official Sensu Docker container images in 2018, we also made a major change to Sensu distribution earlier this year when we stopped distributing separate OSS & commercial binaries. As of earlier this year, all Sensu Go downloads and installers come with the enterprise features built-in – and when you’re ready to upgrade, all you have to do is provide a license key and your running Sensu cluster is automatically upgraded.

Why are Sensu downloads usage-limited?

Those weren’t the only changes we made: we also added a usage limit. One of our more ambitious goals for Sensu Go was to make it easy to get up and running, and easy to scale. As a result, Sensu Go ships with an embedded database, so getting started is incredibly easy; and as of version 5.10.0, Sensu Go also offers an enterprise datastore solution (Postgres), which makes Sensu easy to scale. The packages you download from our website, Docker Hub, or our package repositories (now including a Chocolatey repo for Windows users) all make use of a usage limit to encourage users to upgrade their Sensu deployments to take advantage of the commercial features designed to provide a more scalable, integrated, and secure monitoring solution.

The embedded database in Sensu Go is sufficient for most users, but we needed a way to inform users about how to scale Sensu safely and reliably – and this was the motivation for introducing the usage limit. But the usage limit wasn’t providing any other user benefits, so we got feedback that it felt arbitrary and not very user-friendly. We also didn’t provide an easy or obvious path to compile Sensu Go from source, for users who just want a purely OSS Sensu and don’t need access to commercial features or an SLA for technical support.

A better, more reliable Sensu experience for all!

Today, I’m excited to announce that we are making 100% of Sensu Go’s features available for free to all users, up to your first 100 entities. This includes all SSO and other security features, and every new feature on the Sensu Go roadmap. For the open source purists in our community, we are also happy to announce that as of the upcoming Sensu Go 5.15.0 release, compiling Sensu Go from source has also been simplified (see the sensu/sensu-go README for more information).

If you don’t care about the scalability, integration, or security benefits provided by the commercial features of Sensu Go, or officially supported packages with publicly accessible repositories backed by a global CDN and world-class support, it should be easier than ever to use a pure open source Sensu Go.

How will the new packages work? Sensu Go will work normally up to the first 100 nodes (or “entities”), after which Sensu will reject additional agent connections and events from unknown entities. Existing deployments with more than 100 nodes that upgrade to the new packages will continue to process events from existing entities, but new agent connections and events from unknown entities will be rejected until the number of entities falls below the 100-entity limit. Alternatively, these clusters can be upgraded with a 30-day trial license or migrated to binaries that are built from source (for customers who choose the OSS path).

This change also means a much simpler pricing structure for Sensu, with new pricing packages starting at $600/mo and $1,500/mo. 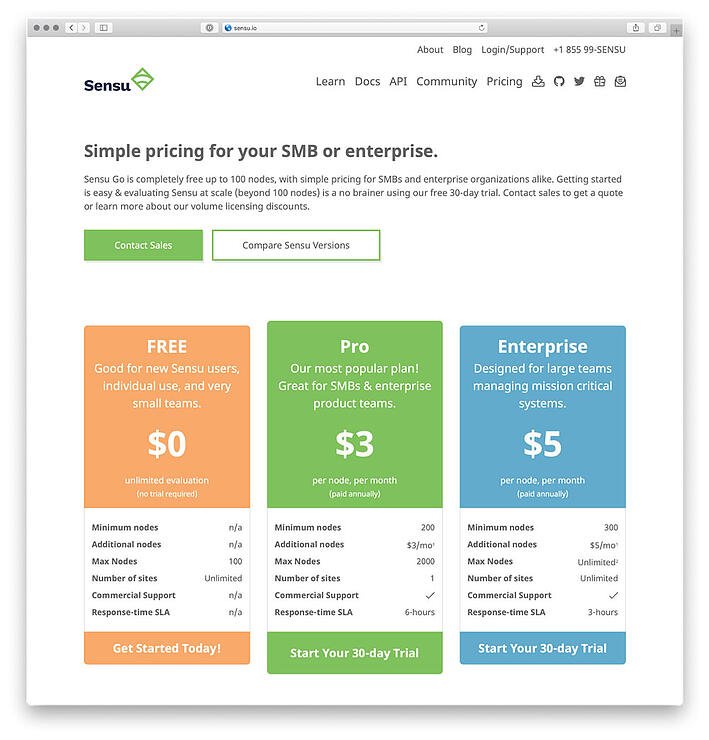 Sensu is free up to your first 100 nodes. After that, we offer introductory pricing of $3/node per month for your first 2,000-nodes in a single site. If you have more than 2,000 nodes, or need a multi-site Sensu deployment, the pricing is $5/node per month. For larger-scale organizations, we offer progressive volume licensing discounts.

NOTE: we will be contacting all existing customers who have purchased a commercial Sensu Go license for less than 100-nodes and offering a refund before the end of the year.

Sensu Go has come a long way since its GA release in December 2019! Here's a look at what we've accomplished and what's ahead for Q1 2020.